(Note: this is the sixth in a series published every Sunday until July, focusing on unsolved NSW murders. If you have any information regarding this or any other case, please call Crimestoppers on 1800 333 000).

I'm a pretty big fan of American Horror Story. The most recent season decided to eschew supernatural horror of previous years in favour of the horror and violence of the real world, specifically the fallout from the election of Donald Trump. I don't want to spoil it for anyone, but if you've seen it, you'll have a tough time sleeping after a character meets a gruesome death at the end of a nail gun. But hey, it's just a TV show, right?

But I bet the writers of Horror Story had heard of the death of Anthony Liu. You may well have seen him yourself. No, not the picture of the living man but the x ray of the appalling way he ended up, a grisly image flashed around the world. This week, we look at the unsolved 2008 nail gun murder of Chen (Anthony) Liu. 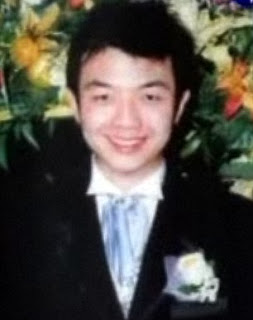 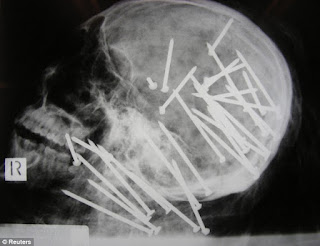 Little information about the life of Mr Liu is on public record. He migrated to Australia from China in 2000, settling in Melbourne before moving to Sydney in 2004. Possibly at some stage he married and divorced, but he did not keep in touch with his ex wife and either way had no other family in Australia. The Daily Telegraph reported that he was gay and lived with a partner in Rockdale, in the southern suburbs of Sydney.

He was last seen in Rockdale around October 19, 2008, at the age of 27. His decomposed body was found by two boys on a canoe ride in mud flats along the Georges River, south of Sydney, on November 1. He'd been bound with electrical cord then wrapped in a carpet that was further bound. the full horror of his death revealed when the skull was x-rayed at autopsy. He'd been shot 34 times in the head and neck, from lots of different angles.

Naturally the viciousness of a murder like this leads one to suspect a link to organised crime: a violent, dramatic murder meant as punishment, payback, a warning to others. If he was gay, was this a hate crime? Sydney had for many years a spate of unsolved bashings and murders of gay men, but they were usually crimes of opportunity; men set upon and beaten at gay "beats" or meeting spots, usually beach side locations, with the victims hurled off the cliffs into the ocean in some cases. There's no known cases where a victim was attacked with a weapon, then driven to another location and dumped.

But dumping victims in rivers seems very much a tactic of organised killings, such as the death of Rack Man, who I covered a few weeks ago, and the unsolved murder of a man whose unidentified torso was found in Botany Bay in 2012, not far from where Mr Liu's body was found.

Whatever has happened in the case since 2009, police are keeping close to their chests. There has been no coroner's inquest. There are no family members to make tearful, televised pleas for information. There is no reward on offer. I really wish there was more I could say.

A quick note on sources and information - all information on this blog is from published sources, including news reports and court and coroner's reports. In cases such as this week's death of Chen Liu, this means there may be less information than say a case like that of William Tyrrell, about whom millions of words have been and will continue to be written, but for whatever this little blog is worth I want to highlight cases that may have received less publicity, in the belief that everyone deserves justice.