Unsolved: the murder of Frank Newbery

(Note: this is the second in a series published each Sunday until July, focusing on unsolved NSW murders. If you have any information regarding this or any other case, please call Crimestoppers on 1800 333 000).

On the evening of March 12, 2007, some friends and I were heading to a quiet farewell dinner in Newcastle before I moved to Sydney. When we drove past Frank's Ham and Beef, a small grocery store on Union Street, there was a completely unexpected scene - several squad cars and paddy wagons parked outside, the area sealed off with crime scene tape, a couple of reporters. We speculated on what may have happened - surely a simple robbery wouldn't merit all that fuss? But why would anyone attempt an armed hold up of that small "corner" store? We didn't know, and confess didn't think any more of it, until the next day when we heard the news.

Frank Newbery had run his small grocery store in Cooks Hill since 1949, after serving in World War II. At the time he set up shop, there were around fifty such stores in the local area; by 2007, his was the only one left. Even at the age of 87, he would deliver groceries to elderly residents himself, as well as preparing his own homemade soups and rissoles to sell in the store. His wife passed away, after Frank nursed her through a battle with multiple sclerosis, in 1989, and the couple had no children, but he was much-loved in the local area, rising at 5am to open the store. He was especially grateful for the custom of the headquarters of the Newcastle Permanent Building Society next door, opening especially on Saturdays to serve them, and they repaid his loyalty and loved him for it.

I never lived in the local area myself, but would pop into the shop occasionally for water or a snack on my way to the art gallery, and over the years progressed from Frank calling me "miss" to "ma'am". I wish I'd taken the time to talk to him properly sometime.

Old Frank lived a long life of decency and service...and it ended, that Monday evening a year ago today, when he was beaten to death in his own store. When I read about it in the paper the next day, as I looked at his photo, I couldn't help sobbing. That poor sweet old man...what did he do to deserve to die like that, left alone with head injuries in the shop he'd owned for forty seven years.

Newcastle was suffering a spate of violence at the time (still is, for all I know), but when old Frank was murdered, something in people's minds seemed to snap, even as their hearts were broken. Drunken brawls at 3am were one thing, this was another. People were upset and angry - and they wanted answers. But there still are none. Eleven years on, no one has been arrested in connection with his murder. It's hard to understand - it's not like this could be the work of a master criminal syndicate. Someone in Newcastle knows, and they're not talking. When I go back there to visit now, it makes it hard to look at the place the same way. It's impossible to feel the same way about a society when its fabric has been outraged so grievously.

There is talk, of course, to fill the void in the lack of a criminal conviction. Was the murder the result of a robbery gone wrong? Because Mr Newbery had $1500 in cash in his pocket when he was found. Was it somehow related to the much maligned public housing estate in a nearby suburb, as per the rumours that have swirled for years? Most of the residents of the estate are decent people, but there's a small but vocal criminal minority that bring chaos to the area. Did Frank see something he wasn't meant to?

We may never see anyone brought to justice for this. But people haven't forgotten. I never will. 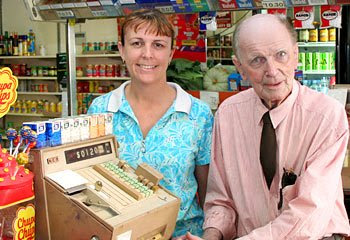